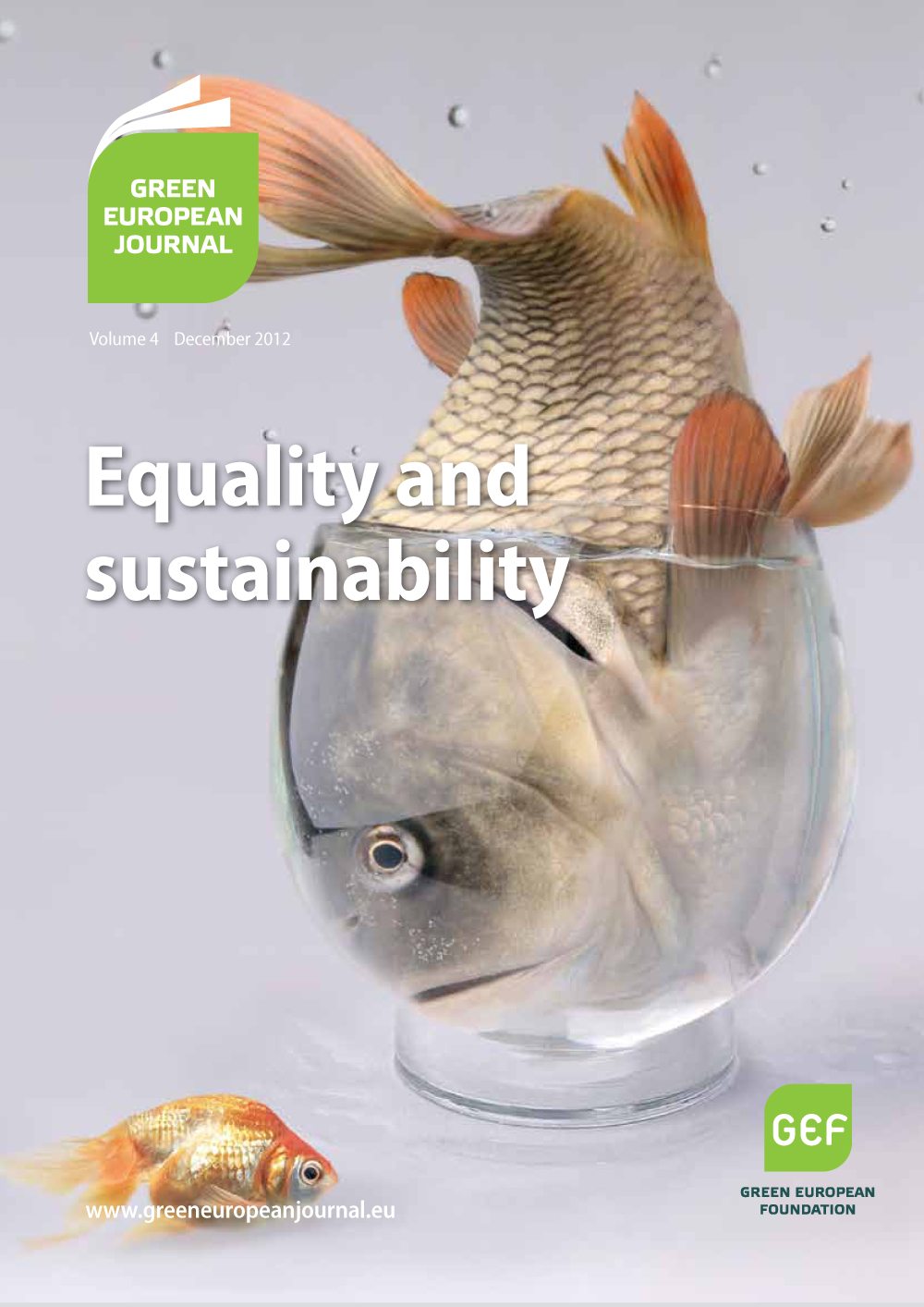 For a Green reconquest of equality

Why do the Greens need to reconsider the ideal of equality in the light of the ecologic and economic crises and what are the challenges linked with such a project? GEJ editor-in-chief Benoit Lechat introduces the 4th edition of the Green European Journal “Equality and Sustainability”

Since their emergence in the seventies, Green movements and parties have not dedicated much attention to the ideal of equality. Were not André Gorz and Ivan Illich, some of the main thinkers of the nascent political ecology, considering that equality was too often linked to materialism and to what they called an “envious individualism” based on social comparison and consumerism? They preferred the ideals of “conviviality” and of “autonomy”, promoting the project of a self-managed economy driven by cooperation and reciprocity rather than by self-interest. Above all, for many Greens, equality was an ideal widely pursued by social-democracy and communism, both ideologies deeply involved in what they called “productivism” that they identified as being one of the major causes of the destruction of nature, whether it was encouraged by the free market or by state planned economies. Thus, the Greens preferred to promote the ideals of self-determination and of inter- and intra-generational justice, synonymous with freedom of choice and sustainable development. Thirteen years later, we probably need to reconsider slightly our vision of equality, at least if we want to take seriously into account the need to tackle both the ecological and the economic crisis. What are the main reasons for such a re-consideration and what kind of challenges does it issue?

INEQUALITY AS CAUSE AND CONSEQUENCE

As documented in the second edition of the Green European Journal, rising inequalities are not only the consequences of the current economic crisis; they also constitute one of its major causes. Since the neo-liberal dogmas have been dominating the politics of a majority of industrialised economies, ensuring the standard levels of consumption of the western way of life was only possible through the growth of private and public indebtedness. The so-called “structural reforms”, the reduction of numerous financial and social regulations, often depicted as the most efficient means of ensuring economic development, not only caused the shrinking of the share of work incomes in the European GDP, they were also responsible for the growth of inequalities inside most of the developed countries and between these countries[1]. In many countries this relative reduction of the size of work income as a percentage of GDP was compensated for by easier access to private credit that fed the financial bubbles in countries like Ireland or Spain. The lack of governance went hand in hand with the deficit of social and fiscal regulation, throughout the Eurozone and beyond, in many western economies.

In the theory of justice of John Rawls, a certain level of inequality is justified within a given society, so long as it contributes to improving the situation of the poorest. But what has happened in Europe during the last decades is exactly the contrary. In the name of the fight against unemployment and of the competitiveness of Europe’s economy in a globalised world, the “structural reforms” undermined the concrete situation of the most underprivileged in our societies. And this tendency was radically reinforced by the competition between social welfare systems that remained regulated at the national level. As a result, solidarity in Europe has never been under such pressure, between debtors and creditors countries, like between the middle classes and the people depending on social benefits. This is probably one of the major explanations for the success of right and left wing populist parties throughout Europe which proliferate on the growing feeling of injustice.
INEQUALITY FEEDS “CONSOLATION CONSUMERISM”
From a Green perspective, there is at least one more source of concern in this evolution: the growth of inequalities is not only socially unfair and a threat to social cohesion, it is one of the main driving factors of many unsustainable behaviours. An example is what some authors call “consolation consumerism”, through which disadvantaged people try to compensate for their social frustrations by purchasing (mainly on credit) goods that are produced unsustainably. And it is hard to imagine that only education would be able to change such consumption patterns, as long as the inequalities which have fed them keep on growing. But even harder would be the task of convincing these people who have been deprived of their consumerist dreams that they should give them up in order to reduce their ecological footprint. A reduction of income inequality should then be coupled with a redefinition of prosperity that should be much less dependent on the purchasing power of material goods and focus more on access to public goods.

UNDERSTANDING THE SOCIAL ACCEPTANCE OF INEQUALITY

There are numerous good reasons to reduce inequality in income and improve access to public goods and there are few progressive political parties that would deny such a necessity. But they are all aware that this is far from being an easy task. The problem is not only technical. It is not just an issue of tax reforms to counter tax evasion and to reregulate the financial sector. It is above all a deeply political and social issue. In most European countries, there are no or nearly no political majorities for supporting reduced inequality and it is unlikely that this will change dramatically in the short term. Why? With Pierre Rosanvallon, we need to understand how the growth of inequalities was socially and politically legitimated over the past thirty years, with the consent of the progressive political parties which were supposed to combat it. Of course, the fall of communism contributed to the disappearance of the “reformism of the fear” which convinced many governments to develop the welfare states after the Second World War. But the evolution of capitalism and society also played an important role. The transition from a ‘fordist’ organisation of work towards a ‘cognitive capitalism’, which by the way was parallel with the emergence of the Green movement, has weakened the cultural and social basis for redistribution. In this new economy, creativity went hand in hand with the claim for individualism, for the right to be “equally different”, contrasting with the uniformity and solidarity of the workers masses of the first industrial revolutions. The sharper awareness of discrimination could not compensate for the erosion of the mechanisms of redistribution. As a consequence, equality was increasingly considered as a relationship between singular individuals, rather than a quality of a society as a whole, an evolution which was illustrated by the development of the theories of justice.

THE EGG OF FEDERALISM AND THE CHICKEN OF SOLIDARITY

In 2012, if we want to give a new legitimacy to the ideal of equality we must avoid, at all cost, falling into the trap of a counterproductive nostalgia for the nationally regulated welfare states. We need to reinforce equality and solidarity inside the different European countries and between all Europeans. This implies that we also have to imagine ways of reconstructing a democratic feeling of belonging to a common society, without chauvinism i.e. without excluding others on the basis of national or ethnic characteristics. For many European federalists, this was one of the goals of the European construction process. The current crisis of the Eurozone shows the original sin of a single currency without common fiscal and social governance and without the possibility of massive transfers between the different Member States. The debate that has been recently launched between Europeans is not only about the level of these transfers that still remain at a very low level in comparison with the transfers in the United States of America. The debate should also be about the necessity of developing interpersonal transfers between all members of the Eurozone. Firstly, because the national welfare states are deeply involved in the competition between national economies and it will not be obvious for them to increase their interpersonal transfers. Secondly, because the necessary “federalist tiger jump” that is promoted by Daniel Cohn-Bendit and Guy Verhofstadt in order to save the European project will not be supported by a broader audience if it is not coupled with a reinforcement of inter-state and interpersonal solidarities. The creation of something like a European welfare state might sound completely utopian; but it has to be our long term vision that we should try to pursue step by step. There will be no egg of federalism without the chicken of solidarity. They are two sides of the same coin: the construction of a European society, based on sustainability and equality, citizenship and reciprocity.