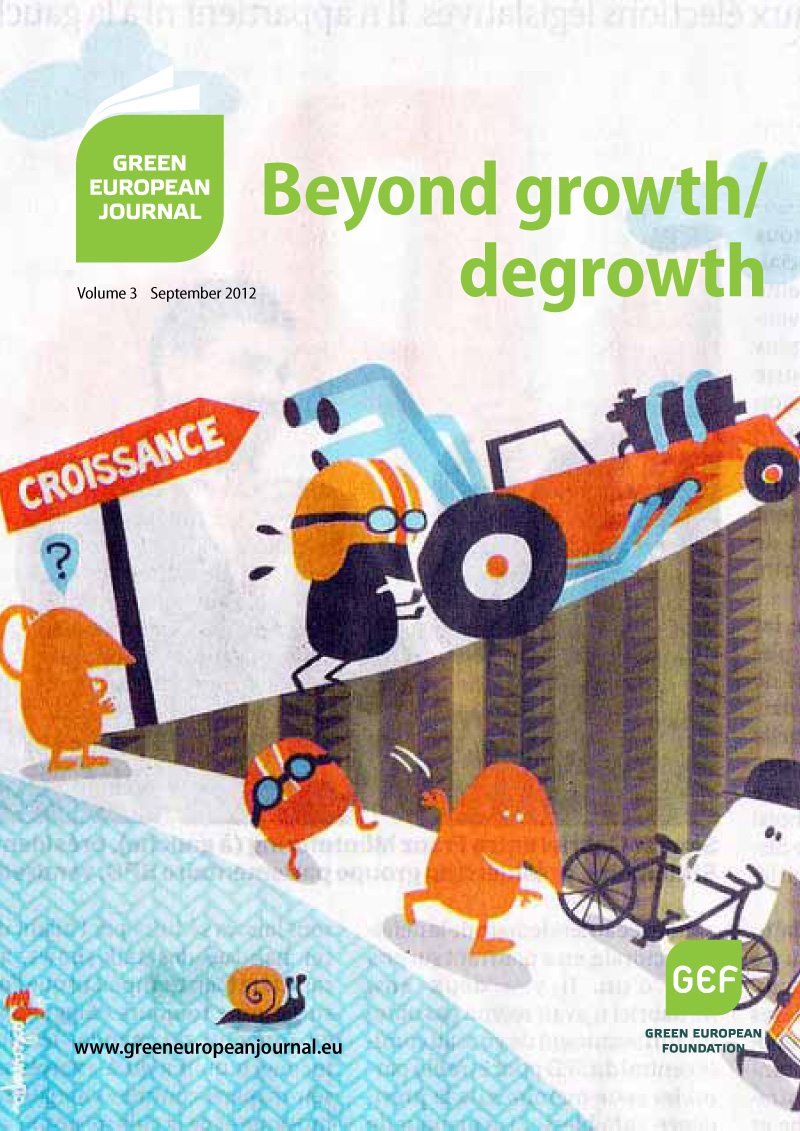 In 2009, the Green New Deal played a crucial role in the European Greens’ success. Prospects of a way out of the crisis by greening the economy convinced many voters that the Greens were not enemies of employment and the economy; a picture so often painted by their adversaries. However, in 2010, the publication of Tim Jackson’s book ‘Prosperity without growth’ put a damper on this optimism by radically bringing into question whether decoupling economic growth from the rise in greenhouse gas emissions is possible or not.

In 2012, the 40th anniversary of the Club of Rome report on the limitations of growth was celebrated in an atmosphere that would be difficult to class as optimistic, to put it mildly. Changes in the parameters of the global ecosystem only give rise to concern. The perpetual economic crisis in which the industrialised world seems to currently find itself forms an environment that is conducive to the re-emergence of a certain number of fundamental questions that the Greens have been asking since their party’s arrival on the political landscape in the 1970s. However, there is still a tendency to avoid these questions and to attempt to continue with ‘business as usual’ scenarios in order to kick-start the economy using old formulas, the consequences of which we already know are disastrous for the environment. For Europeans, it is not only about surviving austerity or cuts in public services – where the weakest are generally the first ones affected – it is also about asking whether growth scenarios – that a sizeable proportion of the left says it hopes for – will truly be capable of strengthening the sustainability of our economy, and in this case, its compatibility with future generations’ right not to live on an inhospitable planet.

A DEBATE THAT QUESTIONS THE GREENS

These questions may be asked by the Greens to other political forces but first they are directed to the Greens by several other relatively new stakeholders. Since the beginning of the 21st century, an extremely diversified set of protestors against growth has developed.. From the degrowth movement that began in France to the transition movement that grew in the United Kingdom (www.transitionculture.org) , over the last few years we have witnessed the emergence of a sometimes very critical discourse with regard to whether policies, particularly Green policies, are capable of overcoming the environmental crisis.

THE RE-EMERGENCE OF OLD DILEMMAS

As demonstrated by Erwan Lecoeur, France is currently experiencing the return of an old dilemma of political ecology, namely, the return of the dilemma between party (do we need to change society through the work of the institutions?) or movement (do we need to take action from the bottom-up and work on lifestyle and develop effective alternatives?). In 2012, like in 1980, those who believe that priority must be given to the work carried out outside the sphere of the institutions rely on the prospect of impending catastrophe to support the idea that we must not wait for change to be brought about by politicians, but we must start to live alternatively ‘here and now’, whilst hoping to quickly convince many to imitate us.

POLITICISING THE ECOLOGY AGAIN AND AGAIN

Here we will support the argument that on the contrary, what we need more than ever is to re-politicise the debate and avoid it becoming limited to a series of sterile dilemmas that lead to zero progress. Dualistically opposing degrowth and growth, movement and politics, social change and institutional change, technology and nature, the common market and the State, serves to do absolutely nothing but push us further into sectarianism that would condemn green parties to political insignificance in the same way as the path to the mainstream and political correctness.

The current edition of the Green European Journal attempts to give an overview of the way in which the debate on growth is evolving in 2012 in a certain number of countries and within green parties. In doing so, it is trying to raise a series of questions that the Greens must ask themselves if they want to reformulate their plan based on contemporary challenges. The Greens are in transition themselves. By refusing dilemmas we are not prevented from questioning the terms of these dilemmas: it is precisely because it intends to organise the democratic debate on the world that we wish to pass down that the green movement is political!

QUESTIONS FOR THE GREENS IN TRANSITION

The rising social discontent against austerity in many European countries show that we need to build a new social contract that would replace the “productivist compromise” that has been ruling the post-war European society and that was based on sharing the benefits of never-ending growth, whatever its consequences for the people and for the environment. This invention of a post-consumerist and post-growth society is far from being an easy job, even though some actions show that it has already started. The Greens should support them and try to coalesce all the social forces that are interested in this project.