The food revolution is a cultural and social revolution, claims the Editorial Board of the Green European Journal, who introduce its fifth edition. 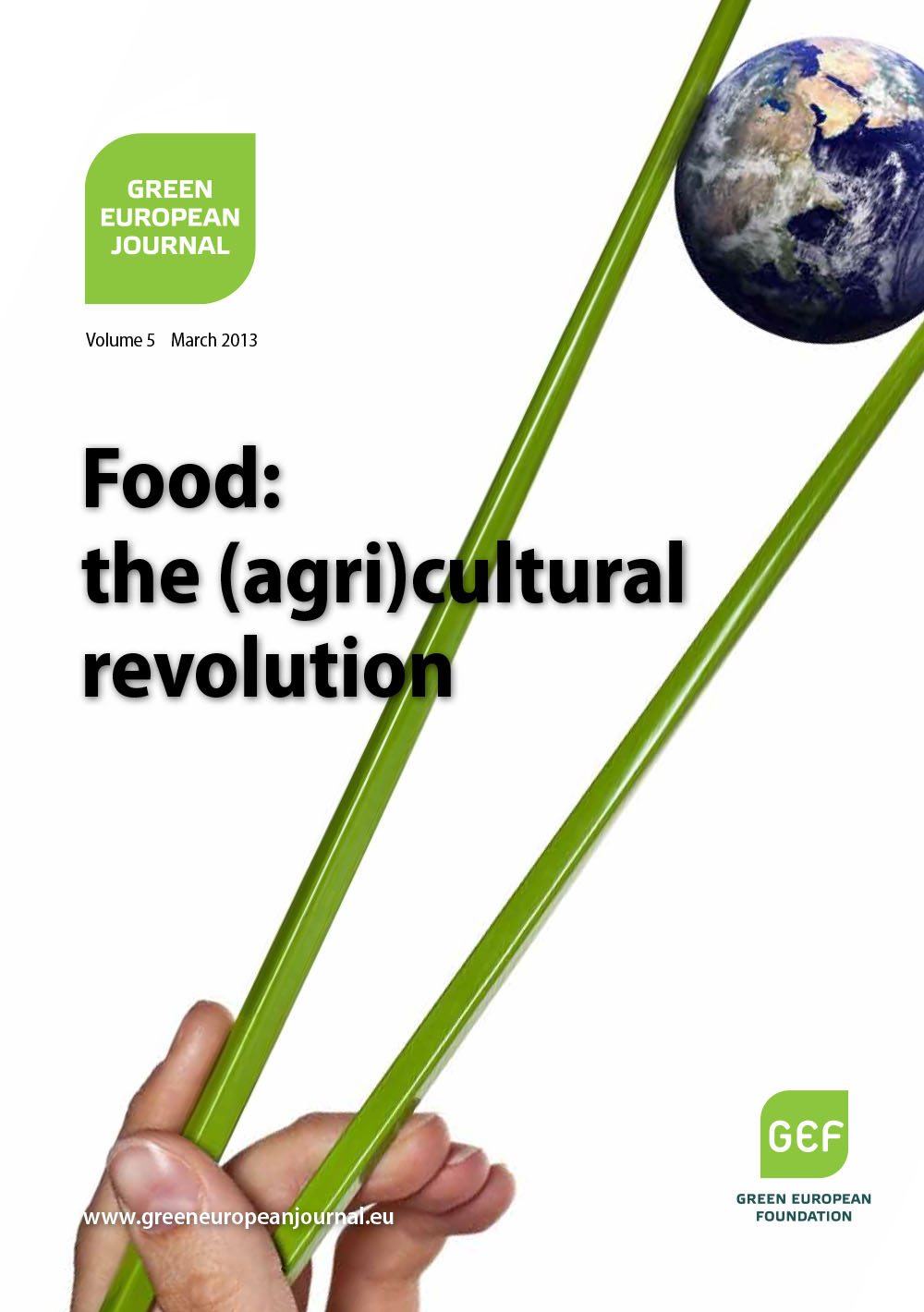 With its lasagne-layers of dubious origin, the horsemeat scandal might be dubbed the subprime crisis of the European food system. Although its consequences are less toxic, it once again casts doubt on the ability of the agro-industry to deliver healthy, tasty and sustainable nutrition. The failure of a system once based on the promise of Europe’s food-sovereignty reveals ironically a dramatic sense of helplessness, shared all along the food chain from captive consumers and desperate farmers to cynical industrials and impotent politicians.

BRINGING BACK TO EARTH

There is urgent need for radical changes, not only in the food safety procedures but also in the whole European agriculture and food production. The good news is that there is a growing interest among the public towards the issue of food, most likely because beyond its physiological function, it represents a crucial link between our societies and their natural environments. Any food and agricultural policy that does not include a deeper understanding of this interaction is doomed to fail. In other words, it is about time to “bring back to earth” a food-chain that we once believed could be wholly emancipated from nature’s contingency.

Our food system extends further than agriculture and the agro-industry. It does not only include the workers, agricultural produce, consumers and the consequences of their activities on health and the environment. The cultural and social dimensions and representations which differ from one European country to another should also be taken into account as they play a key role in its configuration. The politics of food is cultural and social, in addition to being ecological and economic. Therefore, the Greens who are at the forefront of the struggle against the agro-industry and its impact on people and the environment should not narrow down their solutions to a single dimension. As in the case of the economic and ecological crisis, systemic actions are strongly needed.

Indeed agriculture is responsible for more than 30% of greenhouse gas emissions on a global scale. But it would be inaccurate and ineffective to limit the growing urge for its transformation merely to this major ecological issue. Conversely, if we are of course as consumers all concerned by the quality of food, the Greens would make a major mistake in adopting a narrow consumerist approach by only focusing on cheaper, tastier and healthier food. Protecting our environment and health has to be simultaneously combined with the pursuit of enhanced enjoyment and social justice.

FARMERS AT THE CENTRE OF CHANGE

Above all, the transformation of our food system will never occur unless those most affect, farmers, are at the centre of such change. We need to strengthen every mean of reconnecting the consumers to the producers and to the natural and social frameworks in which our food is produced. What is at stake in the Green prioritisation of local produce is quality improvement and transport cost reduction. Moreover, the Greens favour the opportunity of getting producers and consumers together to develop common responsibilities regarding the environment and of working towards common economic interests, even if they don’t always converge.

The expansion of food cooperatives throughout Europe goes far beyond any sophisticated form of progressive consumerism. It is potentially one of the best ways of re-embedding agriculture and its workers in the very fabric of our societies – and literally re-ground our cities, families and collective practices in the earth. We will not succeed in transforming the food system without the development of new alliances between consumers and producers. This is precisely the objective of the cooperative movement almost throughout Europe.

Food is what the anthropologists refer to as a “total social fact”, i.e. something that encompasses the institutions and aspects that structure our social life. It is the meeting point between culture and nature, the external nature, including non-human beings, and our own internal human nature, i.e. our relation to our body and to other human beings. Beyond the growing success of TV programs dedicated to cooking and beyond the growing importance given to the quality and authenticity of the “products”, there might be more than just a hedonistic quest. What many Europeans are seeking is to reconnect with nature and with what the 19th century French gastronomist Brillat-Savarin called “conviviality” which is probably just one of the most refined forms of sociability and altruism. Taking the time to cook for our family, friends and co-workers would probably help us to “redefine our prosperity” more than many complex policies of sustainability.

Developing a better food education might be one of the best ways of fighting the dramatic paradox: just when the financial crisis and austerity policies force millions of Europeans to resort to food banks, public expenses generated by obesity and diabetic ailments are increasing dramatically. Every study on the matter emphasises the link between the combined levels of education and income and potentially unsound food-behaviour. Fighting against those trends on a European and global level is a major issue of social justice and it should not be reduced to its economic dimension.

Olivier De Schutter, the special rapporteur of the UN on the right to food, has shown that in this century there are pragmatic agro-ecological methods that enable us to feed humankind in a sustainable way. We need to put an end to a system whose proportion of waste ranges between 30 and 50%; then it’ll be possible to resist the sirens of the agro-industry, chanting us into believing that only their junk can feed 10 billion humans. There are indeed Green alternatives to the current failing CAP, as they are for example developed by the Boell Foundation or by the Greens in the European Parliament. Yet implementing them will not only be an institutional issue, but also a stimulating long-term cultural process. There will be no great leap forward towards sustainable agriculture. Instead, we are likely to witness millions of small actions undertaken on many levels. The Green revolution starts with our food.