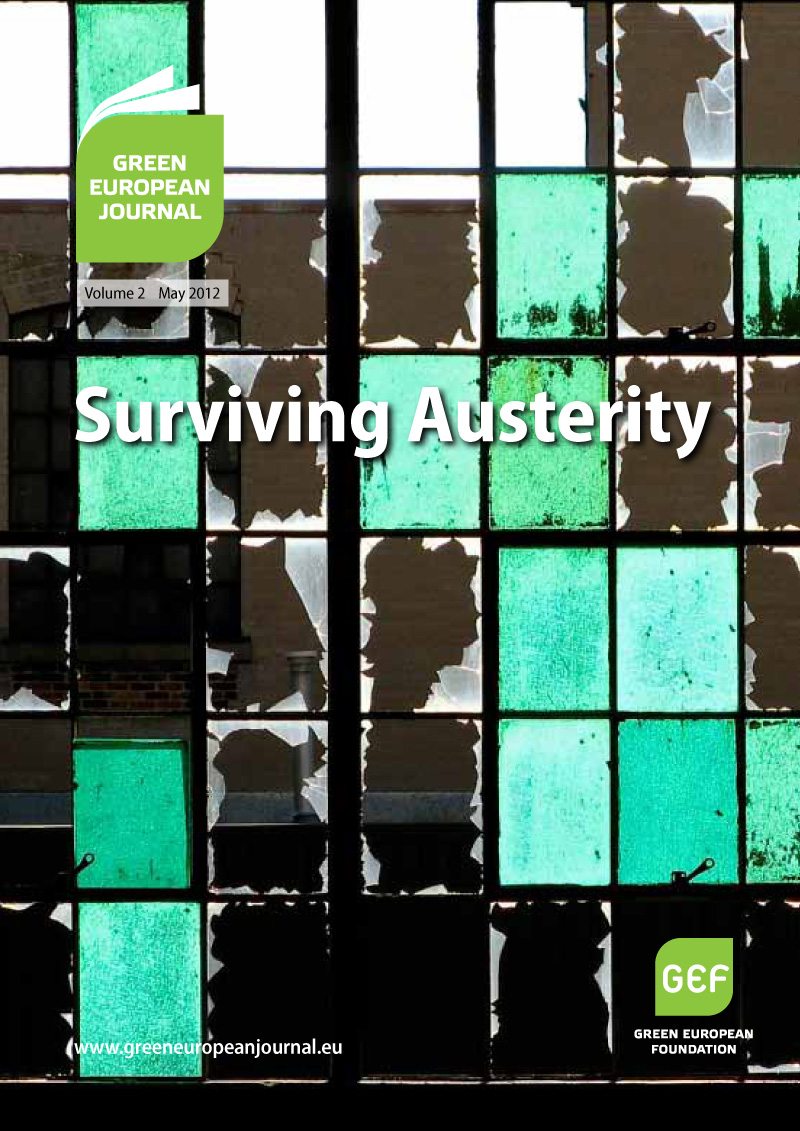 Spring 2012 has seen austerity manifest itself in a number of different forms throughout Europe. How to confront these different forms, discuss them, and begin to gather elements for the development of a new social model through which we can exit the current “polycrisis”[1] ? These are some questions to which this second edition of the Green European Journal hopes to respond.

Firstly, austerity is quite simply a daily problem which has particularly grave consequences for millions of Europeans who are losing their jobs or are facing cuts to their public services, whether this be the social security system or their education systems. Examples of such measures can notably be seen in Croatia, England or Spain which are discussed in this edition.
Austerity is also a policy imposed on those countries that are in the process of finding solutions to reduce the hike in interest rates that is putting them at risk of bankruptcy. This has a tsunami effect for national governments sweeping through one country after the other, as we have seen in France after Italy, Spain and many others.

Lastly, it is a political challenge for the green parties, forcing them to make difficult decisions as to whether they want to maintain overall European coherence, particularly if they belong to national or regional governments, or whether they want to voice their opinions on austerity plans or certain reforms such as the European Stability Mechanism[2] or the fiscal compact and the “golden rule”.

Austerity and the crisis are two sides of the same coin. For some, it is merely a consequence of a problem that it should be counteracting. For others, it exacerbates the very problem that it is supposed to be solving. Austerity is also undoubtedly a trap for the European economy which European Institutions are finally beginning to take notice of.

The words associated with austerity are important. They give the impression of a natural and almost clinical necessity – assainir, bezuinigen, sanieren, structural reforms, haircuts… – to “stabilise” something which is merely the result of decisions taken by human beings. Placing these within a political framework is an absolute “must” and in order to achieve this, we must call the causes of the crisis into question, otherwise it would clearly be impossible to agree on the solutions required to solve it.

And the causes are many: it is not solely down to the poor governance of certain countries and the faults that lie within the construction of Europe; the unsustainable nature of our economy is also to blame. Ecological unsustainability: in the absence of an absolute decoupling between economic growth and the increase of pollution, the growth course on which we are compelled by debt does not allow us to achieve global objectives for the reduction of greenhouse gas emissions. Social unsustainability: our society is becoming increasingly unjust and unequal. More important than the fear of immigration, is the inability of European democracies to counter the rise of inequalities highlighted by the European Trade Union Institute which is strongly pushing voters towards the populist parties.

Budgetary unsustainability: we cannot leave future generations with a debt that would deprive them of any political room for manoeuvre and would permanently confine them to the iron cage of consumerism. But can we do it without triggering ecological and social debt? Too many Europeans have already had to pay the price…

At least one good thing has emerged from the crisis: it is now universally agreed that we have a monumental bridge to cross. But superlatives should not be lost. In reality, if the situation did not have as many serious consequences for such a large number of people, we would have no hesitation in saying that the period would also have somewhat of a promising aspect. It forces us to look at things from a different angle. To diverge from the beaten track and take risks.
The Greens are fairly well equipped to deal with such an undertaking. Whilst taking account of their daily responsibilities in governments, parliaments and local councils, they are more intellectually open to understand the crisis without prejudgement. They know how to draw links between the different forms of unsustainability and understand that different forms of debt are interconnected.

Their demand for democracy and justice allows them to talk seriously about participation. It is not solely a question of a liquid democracy in which each person expresses themself separately from the next. It is also a matter of creating a shared world in which different concepts of co-existence are confronted with open-mindedness. Political ecology is undergoing a transition: since 2009, the Green New Deal has successfully shown that it can embody an economy that is compatible with future generations. In 2012, the urgency seems to have once again reduced the political possibilities for investment into a green conversion of the economy. Therefore, if the Greens want to reinforce their social base for an “ecological re-industrialisation”, they must re-evaluate their definition of what is socially just and share this vision with as many people as possible, starting with social movements, both new and old. This could be their best way for surviving austerity.

[1] This expression was coined by the French sociologist Edgar Morin and has notably been used in the recent appeal made by members of the Collegium International for global and solidarity-based governance. (see http://theglobaljournal.net/article/view/642/ )